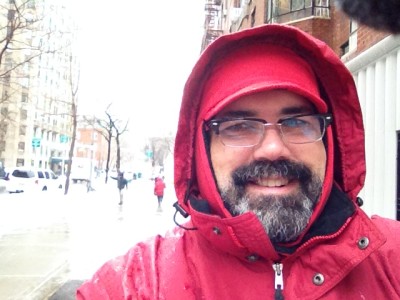 It all started in a small one room shack in the middle of the village. Well, maybe not. The small shack was an apartment in New York and the village was Greenwich Village. Born to an artist and a writer, I grew up surrounded by creativity. My first school was the progressive City & Country School on 12th Street. From there, I went up to the Elizabeth Seeger High School. Really, I went up… The Seeger School rented a floor from City & Country. After Seeger, I went to Bennington College to major in Photography. It was there that I discovered that I would prefer to work in a large dark room with a lot of people rather than by myself in the photo darkroom. I found Lighting Design. Here is a copy of what I place in programs when there’s room. Most often, it’s much shorter.

Program Bio version one:
Scott C. Parker has been a freelance lighting designer for over 30 years and recently spent shy of five years as the Director of Event Lighting for IMS Technology Services. His work at IMS included lighting design and rigging specifications for corporate events, national conventions, and awards shows. Scott produces the annual Stage Lighting Super Saturday workshop in New York City, co-founded with the infamous Sonny Sonnenfeld in 2005. www.stageseminars.com. Scott is humbled by his recent recognition by the USITT with their Distinguished Achievement Award for Education and remains active at the annual USITT national conferences. Rutgers, Temple, Columbus State, Johnny Carson School of Theatre and Film, Pace, City Tech, City College, Edward R. Murrow School, and Berkeley Carroll School have all enjoyed, or put up with, his teaching. Scott is a member of USA829, EIS, ESTA and an ETCP Certified Electrician and Theater Rigger.

Program Bio version two:
Mr. Parker has been a lighting/sound/scenic designer, Equity stage manager and technical director in New York for over three decades. Mr. Parker’s credits include Radio City Music Hall, the Lincoln Center Institute, Gene Frankle Theater, The Public, John Houseman Theater, American Place, Town Hall and other theaters from Boston to Nashville to Nebraska. Mr. Parker has worked as a TV News Cameraman with work appearing locally on all New York City News programs. Work has also been seen nationally and internationally on ABC, CBS, NBC, CNN, TNN, CNBC, overseas television and GOOD MORNING AMERICA, 48 HOURS and REGIS PHILBIN. Parker is a member of AEA and USA829. He has a Master of Fine Arts Degree in Theatrical Design & Technology from Brooklyn College and has studied design at NYU’s Tisch School of the Arts, The Studio School of Stage Design, The Royal Academy of Dramatic Arts and at Bennington College, where he earned his Bachelor’s Degree.